Home HEALTH What is the difference between miscarriage and abortion? For some women,...
HEALTH

What is the difference between miscarriage and abortion? For some women, it’s hard to tell | abortion 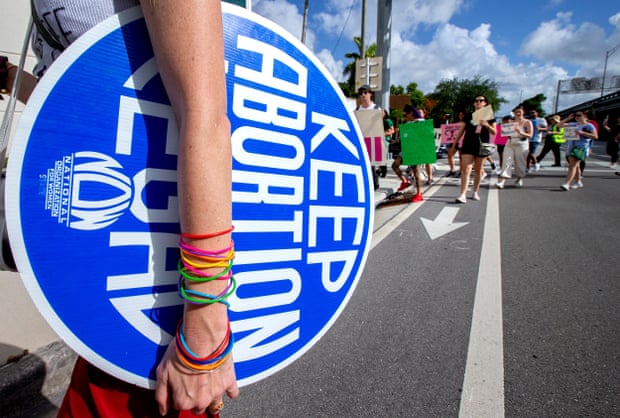 Champion, who was doing her high school exams in France at the time, had developed a pregnancy outside the womb, which threatened to rupture her fallopian tubes, a condition medically known as an ectopic pregnancy. Doctors intervened immediately, terminating the pregnancy and saving her life.

But like cookbook author and model Chrissy Teigen, who this week spoke about misclassifying her own abortion as a miscarriage, Champion didn’t realize she had an abortion until much later.

“It was not an abortion for me [at the time]. I think because my health was on the line, there was no decision to be made,” says Champion, now 31 and living in New York.

Teigen told an audience at a social impact summit that she was pregnant with her third child with her husband, singer John Legend, when she found out about her the pregnancy would not be viable and she would not survive without medical intervention.

“[It was] an abortion to save my life for a baby that had absolutely no chance. And to be honest, I never, ever put that together until, actually, a few months ago,” Teigen said.

She had publicly discussed the loss of her pregnancy as a miscarriage at the time. It was only after the right to abortion, established long ago by the supreme court in Roe v Wade, was struck down this summer that she realized she’d had the procedure done: when she told Legend she felt empathy for people who abort, he pointed out that she was one.

While it’s common for many people to think of miscarriage and abortion as entirely separate issues, doctors say the distinction isn’t that clear medically. Many doctors consider an abortion to be any termination of pregnancy, either by miscarriage or by a voluntary action such as taking pills to induce it. The line between voluntary and involuntary also shifts and blurs: a patient may start bleeding spontaneously during a wanted pregnancy and then require intervention; a different patient might want to terminate her pregnancy only to be told to wait because early signs suggest she won’t succeed anyway (about a quarter of pregnancies end spontaneously).

The gray area between miscarriage and abortion is once again concerning now that more than a dozen states criminalize abortion. Patients could face legal repercussions or travel hundreds of miles to seek care for a miscarriage, fearing it might be wrongly labeled as an abortion. Dr. Joan Fleischman, a New York-based physician, sees a lot of overlap between abortion and miscarriage: in both cases “it’s not the right time” for the pregnancy to continue, either for chromosomal or environmental reasons. She recently performed an abortion on a patient pregnant with triplets. The pregnancies, each implanted via in vitro fertilization, had stopped developing at different stages: one at six weeks, one at seven and one at eight.

“None of them were going to be successful, so I took that tissue away,” she says.

During in vitro fertilization, Fleischman notes, people commonly fertilize more eggs than necessary to increase the chances of a successful pregnancy. Those excess eggs are commonly frozen, discarded, or donated for scientific research (which means destroying them), but none of it is considered an abortion. What’s more, Fleischman’s patient wanted her pregnancy to be successful (she had invested tens of thousands of dollars in it), but the pregnancy still ended when someone made the decision that the cells should be removed: an abortion.

“If someone wants your privacy, [the term] ‘miscarriage’ offers a way of talking about a loss. You know, without dealing with the stigma that people throw at you, no matter who you are, no matter what your situation is,” she says.

The danger is not just stigma: after abortion, people often need an abortion procedure to protect their health, and many people abort after admitting that a pregnancy was unwanted, leaving them open to skepticism and a possible investigation.

In some states, such as Texas, abortion pills have been forbiddenalthough the same pills are commonly prescribed for miscarriage.

One of Fleischman’s patients traveled from Florida to New York for miscarriage care due to Florida’s 15-week abortion ban. Although state law makes an exception in some cases “to remove a dead fetus,” some providers are wary of providing care that could be construed as violating the ban, and some patients are uncomfortable with the scrutiny they endure regarding their pregnancy .

Following Teigen’s comments, many anti-abortion advocates argued that abortion and miscarriage cannot be equated. The anti-abortion media platform LifeNews tweeted: “There is a clear difference between losing a child to an ectopic pregnancy or miscarriage and brutality and intentionally ending a life through abortion.

“In a miscarriage, a mother who wants a child loses it due to medical complications beyond her control. In an abortion, a mother willingly enlists an abortionist to scald, dismember and kill her unborn child. See the difference?” the right wing commentator Dinesh D’Souza said.

These sentiments reflect the changing language around abortion, says Dr. Leah Torres, an OB/GYN in Alabama. Reproductive health has been subject to public redefinition for centuries, she notes, pointing to laws used to criminalize birth control in the 19th century or, more recently, to affirm the existence of ‘fetal heartbeat’ or redefine ‘personality‘.

“When someone calls me and says ‘I’m having an abortion,’ the image I have is of someone who voluntarily induces an abortion,” says Torres. “But it’s perfectly scientific to say that they started having abortions in the bathroom, right? Which means her pregnancy was unsuccessful and it was ending, leaving her body.”

Torres, whose license was temporarily suspended after she went to Alabama to practice following that state’s abortion ban (her license has since been restored, though she remains $115,000 in debt due to the case), argues that these terms are important.

“In the desire to politicize the termination of pregnancy, [anti-abortion advocates] they have eliminated abortion from being a health problem. They have used the word ‘abortion’ to mean one thing: you got pregnant, now you want to kill your baby. So there is no room for actual medical nuance,” she says.

Fleischman says many of her patients are surprised when they see the mucus-like tissue removed during early pregnancy in an abortion, because it doesn’t look like the images they’ve seen of tiny fetuses curled up and forming a head. eyes and an abdomen—images commonly and incorrectly used to convey what the pregnancy It seems that before nine weeks.

“It’s like this big ‘aha!’ moment for women, like, ‘My God, I’ve been cheated on. I’ve been on this emotional roller coaster, of trials, like this is murder, and this just looks like mucus?’” she says.

“This is very intentional,” says Torres. “Because it is essentially about taking abortion out of [the] health care, and see it as a matter of intent, a morality issue, not a health care issue.”

People would find it ridiculous to say that Chrissy Teigen murdered her son, Torres says, after a pregnancy that would have continued had it not been life-threatening. But Torres says that this differentiation, between the type of abortion Teigen had, or someone who spontaneously bled on the bathroom floor, and an abortion someone had after entering a clinic, is essential for anti-abuse activists to understand. abortion justify their rhetoric.

“The right wing needs to see what happened to her to appear different, because the right wing has equated abortion with murder,” she says.

Champion, who had an abortion at age 19, wants that distinction removed, and not just for her.

“I want to contribute to depoliticize this word ‘abortion’. To give it more meaning, so people see it as access to health care,” she says. “The sooner we can talk about it as health care, the better.”

These US restrictions on abortion threaten reproductive health everywhere

Woman carrying a baby on her back while shopping for vegetables to cook at a local market in Bhaktapur, Nepal. (Thampitakull Jakkree/Shutterstock) subscribe to...
Read more