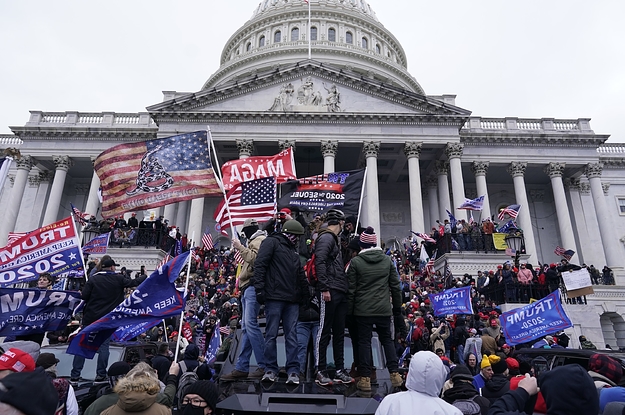 A third person has pleaded guilty in the Justice Department’s seditious conspiracy case against members of the extremist group Oath Keepers for their role in the Jan. 6 riots.

William Todd Wilson, head of a North Carolina chapter of the group, pleaded guilty Wednesday to one count of seditious conspiracy and one count of obstruction of official proceeding for his role in what the government calls a scheme to “oppose the legal transfer of presidential power by force. as part of your please tryWilson has agreed to cooperate with the government in its ongoing investigation.

According to prosecutors, Wilson kept firearms and other equipment in a hotel in Virginia during the run-up to January 6 and then went to DC, where he became the first Oath Keeper to breach the building and was “in the center of a mob.” of people trying to open the doors of the Rotunda. In the aftermath of the riots, Wilson dumped his cell phone into the Atlantic Ocean to “prevent law enforcement from uncovering incriminating evidence of his involvement in this conspiracy.”

Wilson, 45, is the third person convicted of seditious conspiracy, and the eighth member of the Oath Keepers overall, to agree to cooperate with the government in the growing case. Earlier in March, Joshua James of Alabama was the first person to plead guilty to the sedition-related charge, followed last week by a guilty plea by Brian Ulrich of Georgia.

However, unlike James and Ulrich, Wilson was not previously indicted by a grand jury, and the fact that his first court appearance comes as a voluntary guilty plea suggests that he may have already been secretly cooperating. with law enforcement for an undetermined period of time. .

Wilson’s name has not appeared at all in the thousands of documents and records spanning multiple Oath Keepers-related cases filed over the last 16 months, except for a single mention of his name in voluminous evidence filed by another defendant two weeks ago. . That document showed that Wilson, of Newton Grove, North Carolina, participated in a group phone call between Oath Keepers on November 9, 2020, which was arranged by the group’s founder, Stewart Rhodes.

On the call, Rhodes, who was charged with seditious conspiracy in January but has pleaded not guilty, called the presidential election results a “fraud” and said then-President Donald Trump should “refuse to budge.” He encouraged Oath Keepers to come to Washington to defend Trump and compared the cause to the Alamo. “So if the shit starts, rock and roll.”

Court documents have described how squads of Oath Keepers from Florida, Arizona and North Carolina gathered at a Comfort Inn in Arlington, Virginia, where they deposited weapons and tactical gear. Those people, prosecutors allege, formed a so-called quick reaction force, or QRF, which could be called to DC, which has strict restrictions on firearms, if the need arose. In the November 2020 call, Rhodes said that if Trump invoked the Insurrection Act, he would call the QRF.

“We’re waiting for you to give us the orders,” Rhodes told his members. “And if he does that, then DC’s gun laws won’t matter.”

In the end, the Insurrection Act was not invoked, the QRF was not called to Washington, and Trump did not remain in office, but prosecutors say the Oathkeepers still succeeded in their conspiracy because their presence on Capitol Hill helped compel Congress to delay certification of the Electoral College.

Wilson, the leader of the Sampson County, North Carolina, chapter of Oath Keepers, was active in encrypted leadership chats for the group in the wake of the election, testifying, for example, in a chat on December 21. 14, 2020, “It’s time to fight!”

On January 5, he drove to Washington with an AR-15-style rifle, a 9mm pistol, 200 rounds of ammunition, bulletproof vests, pepper spray, a pocket knife and other items. “He’s going to hit the fan tonight!” he wrote in a group chat on the Signal app that day. The next morning, he traveled to DC with Rhodes and marched to the Capitol; Shortly thereafter, Wilson entered the building “armed with a knife.” As the doors to the Rotunda opened, Wilson filmed other Oathkeepers entering the building on his cell phone and eventually moved outside, where the group gathered around Rhodes.

Notably, Wilson also witnessed a phone call between Rhodes and an unnamed Trump intermediary made several hours later at the Phoenix Park Hotel. According to Wilson’s guilty plea, presented on wednesday“he heard Rhodes repeatedly implore the individual to tell President Trump to call in groups like the Oath Keepers to forcibly oppose the transfer of power.”

Rhodes, the document continues, asked to speak directly with Trump, but the request was denied.

The next day, Wilson changed the settings on his phone to prevent “incriminating evidence” from being stored in his Apple iCloud account, and later that month he dumped the entire device into the ocean.

A second trial for seditious conspiracy, for those who have been released on bail and are not in jail, is scheduled for September 26. Additional trials for the defendants in the other case are scheduled for November and next February.

Separately, on Wednesday, the federal judge overseeing the Oath Keepers cases, Amit Mehta, agreed to release the head of the Arizona chapter of Oath Keepers from pre-trial detention.

Edward Vallejo, 63, was charged with seditious conspiracy with Rhodes in January and has been in jail since his arrest. Prosecutors say he was part of the QRF stationed in Virginia on Jan. 6 and that he called for “armed conflict” and “guerrilla warfare” in a podcast interview that morning.

A week after his arrest, a magistrate denied Vallejo’s bail request, but Mehta struck a different tone. Although there were disturbing elements to his involvement in the alleged conspiracy, Mehta said, the fact that he never actually set foot in DC, and also that he was on the run for a full year before his uneventful arrest, convinced him that Vallejo was not is a significant threat to public safety. As a result, he can now return to Phoenix, where he will be under home confinement under the supervision of his wife.

That leaves just four defendants under lock and key: Rhodes, Kelly Meggs, Jessica Watkins and Kenneth Harrelson. They are all charged with seditious conspiracy.

Ring is creating a smart intercom system for apartment dwellers

Arizona’s future prosecutor is on the ballot

The drive by special interests to raise taxes is relentless, and democratic guardrails can be an important defense for taxpayers. That's the logic...
Read more